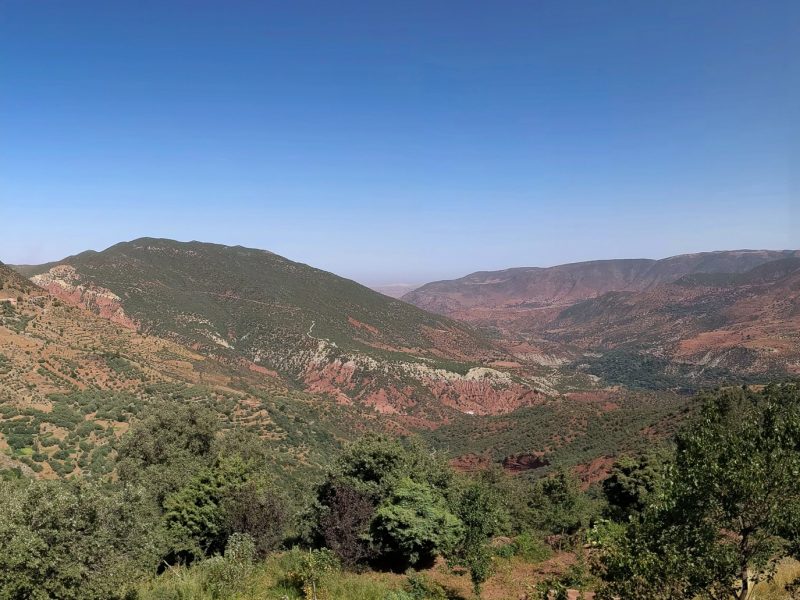 Today we drove approx 350km over the course of about 6.5hrs. A good chunk of this was on the N9 which is the main national route between Marrakesh & Ouarzazate, so a lot of traffic and then also add in some roadworks with lengthy delays. Still the scenery and landscapes were fantastic and I would have loved to have taken it all in from the front seat of the bus but next time. There were a few times whilst driving when Carol and I who were in the front row for part of it would grab photos of the landscape out the front windscreen over the shoulders of Brahim & Mohamed in the front passenger seats. It was just a kaleidoscope of colours on the hills.

Jumping back to the lovely riad at Aït Benhaddou for a moment. I just loved, loved, loved this combination of the green tiles on the tabletop, the green & terracotta tiles surrounding the pool and then the bluey green tiles in the pool! So much green love. Green tiles were something that I very much fell in love with whilst we were in Morocco. Especially the green tiles that had just that right level of pearlescent lustre.

Our first driving leg was just under 3 hours to get us to the Tizi n’Tichka pass. The zig zag road coming up the cutting to the pass at 2260m is one that you often see featured round the place about Morocco and as due to its location on the N9, it is one that many tourists will travel on. The zig zag was pretty cool and like the Dades Gorge, I would have loved to have driven up this myself. We were coming from the south so drove down it rather than up it but as you know I have said, the next trip to Morocco…. As this was a driving day, we didn’t have a long stop here, just enough to stretch legs, get some photos (it was pretty speccy) and then back in the bus.

We had driven past a lot of prickly pear in Morocco and had also seen the fruit for sale in the streets. It was quite weird seeing it grown and cherished in Morocco compared to Australia where it is an invasive weed. In saying that though, it was quite sad to see the extent to which Dactylopius Opuntiae is destroying the crops in Morocco.

Our next little driving leg was about 30km but it took us just under 1hr due to road works along the way and a fair amount of traffic on the road as well. One of the notes I wrote in my journal was that it was interesting to see the level of PPE that a number of the road workers had on – high vis, hard hats and dust masks! The dust masks in particular were the surprise as I had not seen any construction worker or trades worker in the last 16 days wearing such protection. This driving leg got us to a roadside restaurant/convivence store, which I just loved. The view it had out the back was ah-mazing! Reddy, orange hills but now they were covered in vegetation as we were on the Atlantic side of the Atlas Mountains which much higher rainfall. In addition to the fantastic view, this place had the metal work that would take out the gold medal for my favourite metal work in Morocco. The fresh blue paint, the combination of shapes, the blue paint on the wall behind it. It was just perfect and if I could have taken the door home with me, I would have.

After having a decent leg stretching break and coffee break for those that needed it, it was back in the bus. This time we drove about 1hr 20 to the town of Ourika, where we would have lunch. This section of driving was quite interesting as we were coming down the mountain range and into much lower altitudes and back in to the plains before we would head back up another finger of the range to Imlil.

Brahim had said that we were going to have a treat for lunch and a treat we did have. He went to the butcher a few doors down from the grill restaurant that we had pulled up at to get fresh meatballs to be cooked at the restaurant. Something that you could not fathom doing in Australia! BYO meat to a restaurant. The meatballs were cooked on a nice smokey BBQ grill and they tasted delish. The restaurant served us the meatballs with a few nice big salad plates. I was most delighted to see nice-ish looking cos lettuce leaves on the plates. As someone who eats a lot of fresh leafy greens, I was dearly missing them in Morocco.

We drove up to the bottom of Imlil and were quickly out of the bus and our big luggage was packed into a different van to lug it up to Aroumd. We were going to walk up from Imlil, this was a lovely walk and it was so different to all the areas we had been in previously. Lots and lots of walnut trees, apple orchards etc. The village of Aroumd was where Brahim our main guide was from so it was nice to be in his home town so to speak. It really was such a lovely gully to walk up through. I adored these massive marigolds planted outside our guest house! We arrived at our guest house at about 5:30pm. Not bad since we had left Aït Benhaddou at 8am that morning.

We were greeted at the guest house by lovey cooks again, we were back to their fantastic mint tea which after the mint tea at Aït Benhaddou was just a total delight. We were also back to their cooking for the next week whilst were in the Toubkal region for this walk.

However, you know that really nice looking cos lettuce at lunch? Yeah, it may have tasted great and certainly gave me the fresh leafy green hit that I had been craving but it also gave me a hit of well everything else when my stomach went to digest it. That lovely dinner that we had just eaten was unlovingly brought back up! I had been so good with my food and hand hygiene every moment prior to that cos lettuce. A moment of weakness, would lead to a lot of weakness in the days to come… The coming days, were not going to be anything like I had planned or hoped…

Till tomorrow and remember, be safe