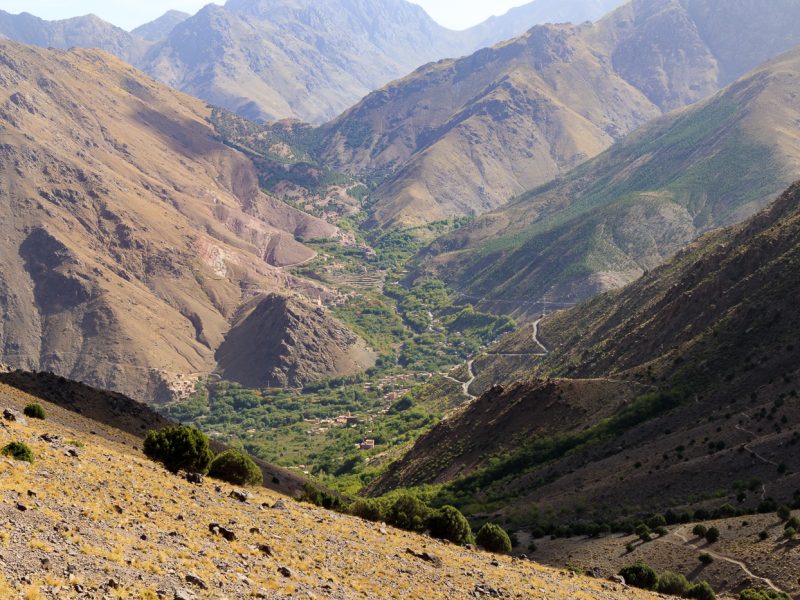 Today we were off on a two day walk that would bring to an end our walking in the Atlas Mountains, we were going to start rolling generally back down to sea level from here on out. Margaret however was going to continue her stay in the mountain air of Aroumd for another night she was still not up for walking a solid day. We left Aroumd just before 9am and walked back down the P2005 for about 1km before we left the road and followed one of the many foot/mule paths that traverse this country. It is interesting to think about how many hundreds or thousands of years these paths may have been transited over. Paths that are kept alive as there is so much transport done in these parts by foot and mule still. When we came off the road, it was general uphill slog to the pass at Tizi Mzik at circa 2,480m and then we would descend down to to Tizi Oussem. For me, this was a hard slog of a walk, I had only done little tiny walks since getting sick, I was still very mindful of what I was eating and I was most certainly not eating a lot of food so I was mindful of my energy levels for such a walk. The landscape today was just fantastic, looking back over the Imlil valley and all the layers in the hills was just magical.

When we eventually made it up to the pass, there was as to be expected a little cafe, where you could of course get freshly squeezed orange juice. I was more concerned with catching my breath and getting making sure that I was not about to throw up or collapse, I did have a few sips of orange juice though. Oh, it was marvellous. I was the highest my feet had ever walked.

Coming down the other side of the pass was a very lovely ramble for the first little while as you can see from the elevation chart below, sort of like nice rolling fingers as we moved across the slope. We then started to go down, down, down, down. I was pretty impressed that I didn’t roll my ankle at all on this descent as the ground was quite screeish in parts so ripe for a good ankle roll. This side of the pass was mostly populated with juniper trees of varying ages, most quite old.

As you can seen in the elevation chart, we started going down hill fast and even more so when we got to the top of the village of Tizi Oussmen, sheesh, you would get fit very quickly living in this village. It was built onto such a slope! We reached out gite for the night and we had a very nice hot pasta late lunch which was just super. As we descended through the village, we passed a retaining wall that was partially made up of old mule saddles! We also passed a herb garden that was in a high fenced enclosure with a padlock on the door! Quite a surprising sight to come across in this part of the world.

After lunch and after we had had a wee rest, Mum, Fiona, Christine & I headed off for a bit of an explore through the village. Brahim had deemed this village safe enough that we were allowed to go wandering on our own and oh what a wander it was going to be.

We passed lovely metal work doors, old communal ovens, very, very hold houses, a sardine tin door and we eventually got down to the road, which was literally the end of the road as it was a turning circle at the end of the bitumen below the village but above the apple orchards that flanked the river below. We came across a little travelling homewares and clothing shop which was very interesting to see and we watched apples coming up from the orchards on mules and the crates all getting stacked up for further transport. As we were walking through here, an older gentleman, pulled an apple each out of one of the crates for us as the most marvellous gift. It was such an amazing apple, so fresh, so crispy, so sweet. This apple gift was not we could have imagined our day containing this morning when we set off from Armoud.

We walked down the road a bit before taking another path back up into the village, here we passed a lady who was tending to the walnuts she was drying on her roof getting ready for winter. We had passed many food stuffs getting dried on roof tops or road sides and walnuts was just one of them. We waved and said hello back to the lady as she greeted us. All of a sudden, she was also giving us a handful of walnuts for us to take. This generosity was really quite something, especially since we had not long finished eating our apples.

We then continued to walk up through the village in the direction of the minaret as we knew that was not far from our gite. We got back to the gite and shortly after we arrived, our lovely cooks served a late afternoon tea of Beghrir (semolina pancakes) with jams. It was just like having pikelets and golden syrup for afternoon tea at home 😀