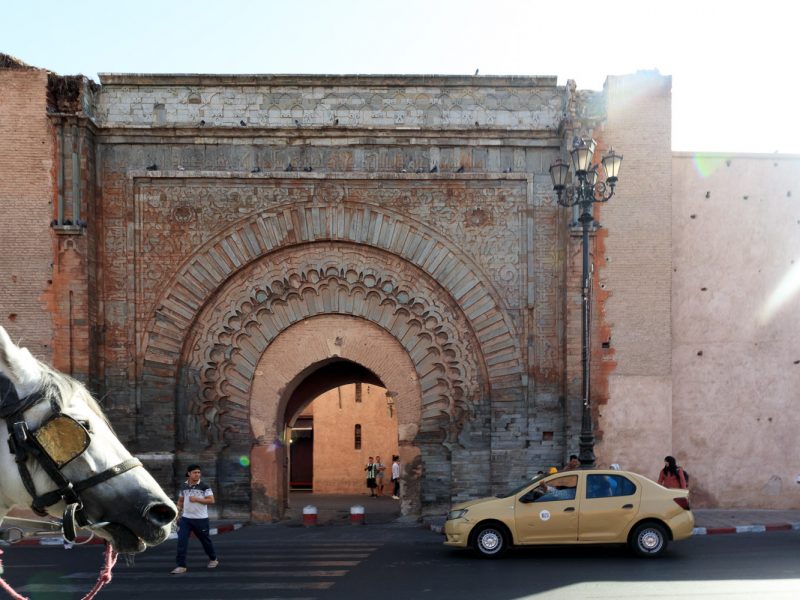 Today, was our last day on tour, which like all things was coming to an end. We had a lovely buffet breakfast in the hotel and fortified ourselves for a day of exploring. Our tour would take us through to lunch time and then we were free in the afternoon to explore as we wish. In pure Marrakesh tourist style, we travelled from our hotel to our first two destinations in Calèches.

The carriage ride was quite lovely and I enjoyed that I did not have a roof over my head and I was able to look completely around and take in the cityscape. Our first stop was Avenue Hommane Al Fatouaki across from Parc Lalla Hasna. We would walk through this park to walk round the western, southern & eastern sides of Koutoubia Mosque.

The park was lovely and on reflection, I’m kicking myself for not actually returning to walk through the park properly in our following days in Marrakesh. I absolutely loved this gazebo as well as the park benches. The street lights were also quite ornamental as well. Next time…

If we had not already realised it, we were now in a peak tourist area, you would realise it pretty quickly this morning. Not long after we started walking through the park, we started to get approached with trinkets and the like for sale.

We approached Koutoubia Mosque, from the western side that borders the park. On reflection, I’m actually quite glad that we approached from that side not from the northern side which is the classic view as you look at it from Jemaa el-Fnaa. I feel we got a much better appreciation for the design and the beauty of the building coming at it from the west and then walking all the way round to near the northern side. I thoroughly enjoyed looking at all the building details whilst hearing about the history of the mosque. Like many people Koutoubia, would become one of my most loved buildings in Marrakesh.

Something that I was most interested to see was an LED panel showing current and cumulative output of the solar panels installed on the roof as well as carbon dioxide emissions avoided total as part of a nationwide green mosque program. You can read more about this green mosque program at the following links – GIZ Green Mosque program, GIZ Green Mosques and buildings, Guardian article regarding the roll out, DW article. It is really such a great program to see, especially in how they working in the villages to put solar panels on mosques to also power LED lighting which enables local school children to more easily study at night.

It was now back in our Calèches to go down to the Saadian Tombs. This was another interesting building and it is well worth reading the Wikipedia page linked above for details.

The tombs were quite interesting to look through but they are very much a key tourist destination so they were packed. I’ve chosen to share two images below from inside the grounds of the tombs which are not likely to be the photos that you will normally see from the tombs :D.

The Kasbah Mosque or Moulay al-Yazid mosque that is near the entrance to the tombs was exceptionally striking and I was most taken by the light blueish tinge of the green tiles on the minaret.

We now walked through the Jewish section of the medina to our next destination. This section had recently had new cedar screening installed which looked fantastic.

Our next destination on the key tourist destinations of Marrakesh was the Bahia Palace. It was us and a whole lot of other tourists 😀 The work that had gone into this palace was stunning. I would like to revisit the grounds in the early morning before the sun was straight overhead to enjoy the grounds in a more muted light.

We now walked through the medina and into the souks for an introductory tour and also to go to some oil/spice/perfume shop that our local guide wanted to take us too. Most of us were not interested in this shop at all though as we had picked up anything we had wanted in the last few weeks. It was a nice air conditioned space though…

We had lunch in a cafe which Brahim knew quite well and the food was quite good. After lunch, it was now free time. A group of us went back to explore the souks. Just like in Essaouira, we had come across a haberdashery store on our little intro tour of the souks before lunch. Of course, when we returned it was closed. The Motherships and I had a few extra days in Marrakesh, so with some return trips we were hopeful of finding it open. As we ventured through the laneways of the souks, we gradually lost members of our group until it was just Mum, Fiona & I. We were all just happy to walk, explore and meander. Knowing that our feet would eventually walk us back to the hotel.

We stumbled upon a few fabric shops that we had a look in and I actually purchased some with the view to making couch cushions with it. 1 year later, those cushions are still not made but soon. We stumbled into an Aladdin’s cave of a shop, where Mum was keen to find some beads to use her in creations. All three of us walked out with a purchase though :D. I walked out with a nice silver and black onyx ring to add to my collection of souvenirs in the form of jewellery from my various travels over the years. However, I would promptly loose this ring in the Auckland airport only a few months later….

We had a lovely walk back to the hotel from the medina in the late afternoon sun which I thoroughly enjoyed. We joined together a number of tables for one last group meal at the hotel restaurant and one last round of sharing our highlights.

After dinner, the Motherships and I along with Fiona & Mary-Anne walked down to Menara Mall to enjoy the fountain show. It was just ah-mazing and such a lovely way to end our tour out for an evening walk with Fiona & Mary-Anne. These two were the only other travellers on our tour that we knew before the trip as they had both bushwalked with Mum over the years and Margaret had also travelled with Fiona before with Mum on adventures. Fiona was also our Australian tour leader and did a marvellous job as our guide!