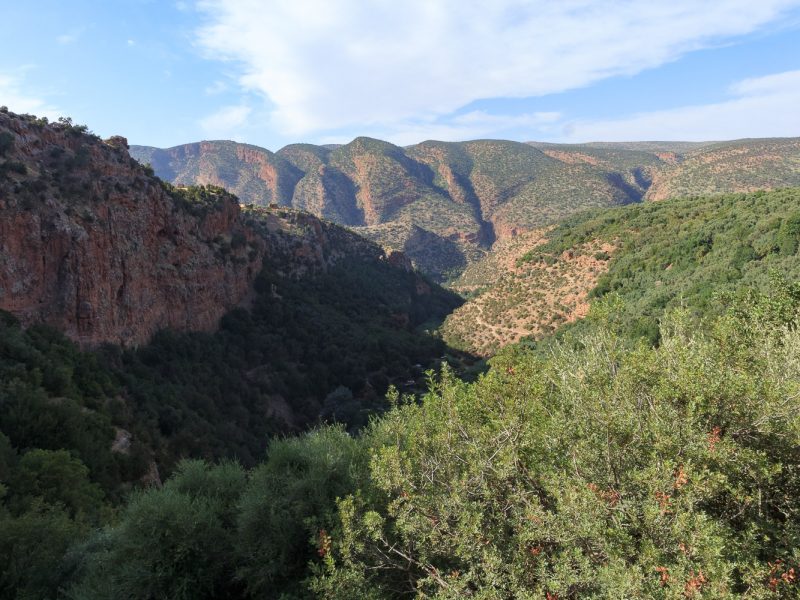 This was a big day out 😀 and just like I have said previously, this was another absolute highlight of a day. Mum for those that don’t know is a big fan of waterfalls. We had many holidays when we were younger that were partially centred round ticking a waterfall off the list. If you were travelling, Mum’s request was/is always for a waterfall postcard. We had been in Morocco now for 31 days and other than the cascades at Aroumd/Imlil, we had not actually seen any waterfalls. This was all going to change today as we were going to see a right ripper of a water fall – Ouzoud Falls and also the natural bridge at Imi-n-Ifri.

I had spent a bit of time a few days earlier comparing a vast number of tour options on trip advisor and eventually settled on one run by Great Travel Morocco that seemed like it would be a good fit for us. Michelle who we had been travelling with for the last 31 days was joining us on this adventure as was her brother who had joined her in Morocco for a holiday at the end of our tour.

We were picked up from our riad at 8:30am by our guide and a driver. We set off in an mini bus, not that much unlike the Toyota Targo (Gen 1) that our family used to load into for waterfall adventures. This van, was just well quite a few years newer 😀 It felt a bit strange to be driving, driving, driving again. We stopped shortly after starting our trip to fill up with petrol. This was quite different as I think I recall only once or maybe twice on our tour had we actually stopped to fill up the bus with petrol. On reflection, I guess that was one thing that Ibby would go off with the bus to do by himself and the Sprinter would have had much larger petrol tank than our 8 seater mini bus we were now in! It was interesting, nonetheless. The random thoughts you have when you are flicking through a day in your mind minute by minute, kilometre by kilometre.

We started the morning off with a just under 2 hour drive to Imi-n-Ifri (or Imi n’Ifri). This was a very interesting gorge and it is one that I think would be a bit of fun to explore/rock hop up or down the river from the natural bridge. Next time…

One of the other “features” of the natural bridge is that that if you stand in just the right spot, the reverse silhouette that you see is said to resemble the general outline of the African continent. You can judge it for yourself in the pictures below. I reckon it is pretty darn neat. Our local guide of course, knew just the right spot for us to stand in to get a get a good photo with the reverse silhouette :D. One thing though that I didn’t recall reading about in the various comments I had read about the natural bridge was the level of pigeon poo on the ground under the bridge. There was a lot of it! Watch your step if you do venture here 😀 We came out on the downstream side of the bridge and then walked back up a good number of stairs and sloping walkways to the top of the bridge where our van was parked.

It was then back in the van for about another 75 mins of driving to Ouzoud. By gosh, this was a bit of a change from the tourist destinations we had visited on our tour :D. But, this is of course a very popular day trip from Marrakesh with a lot of the big bus tours so it makes sense that it is was a very well maintained area (well in parts).

But of course, first it was time for lunch. We were deposited at a sprawling restaurant near the top of the tourist area that comes off the main road in. Lunch was quite nice but also slightly drawn out but we were used to that now. We wanted to get exploring these falls!

One of the reasons that I had picked this trip instead of the others was because it involved walking down the gorge a distance and then walking up the river towards the falls. This was much more appealing to us than the other trips that had you walk down the stairs on the western side of the falls to the bottom pool and then walk back up the same stairs.

We were met by a young local guide who was very passionate about his local area. We walked across the top of the falls where the Tissakht river comes flowing down in numerous branches to create the wonderful collection of mini falls that fall over the top of the cliff. There was civil works underway whilst we were there to rebuild some of the branches and improve flood control so it will be interesting to see if they actually end up with more or less branches coming over the falls.

We had an interesting walk down through small olive groves and then we wound our way down through some steeply terraced gardens and small farm plots till we reached the first collection of cafes. These were all very quiet today but a few months earlier, they would have been packed to the brim with local tourists coming to visit or camp at the falls. We had walked down a fair way and it was interesting to see the sheer diversity in the cafe areas as we headed back up towards the main falls. We had walked through cafe areas on streams/rivers etc a few times on our trip but this was the largest collection of them by far.

It was quite nice walking up stream towards the falls as you would catch glimpses of the falls through trees and you would arch your head for a better look and then we were there! At the bottom of Ouzoud Falls.

We then of course had a dilemma/I had not quite properly read the full description about the fact that we needed to pay a few dirham to cross the pool via a little boat and there was no real option to cross to the other side without going across in the boat. Mum though, as always brought us to our senses and really what was a few dirham to us in the grand scheme of things? Nothing. We of course then also “upgraded” our little river crossing journey to include a paddle up close to the falls. This was well worth the extra money and really, it was fantastic to get up close to the falls. We also then had the opportunity to try paddling the boar ourselves if we wished 🙂

It was very different walking back up the western side of the falls, there a number of flights of wide stairs with viewing platforms that came off at points as well as a good number of cafes, souvenir shops, spice shops etc.

As we were walking up through the shops that lined the main path up to the car park and the road, I spied one shop that had an ice-cream freezer and I finally found the citron flavoured local “calippo” that I had been looking for. It was the perfect limey, lemony frozen ice block. Our local guide was keen to show us the shops that various friends owned/worked in along the way, however we had all been in country long enough now that we had generally picked up all the bits we were after!

When we got back to the bus, it was time for a “long” drive “home” to Marrakesh. It was about 2 hours 40 mins in total to drive back. We stopped at least one place on the side of the road shortly after leaving the falls so Mum could look at some plants and then we stopped again at a large roadside cafe complex at Tamellalt for a driving break, leg stretch and coffee break if you so desired.

We got back to our riad at about 7:30pm. It had been a big day out! We scooted across the road for a quick pizza dinner and then we all collapsed pretty quickly. Sleep was needed as tomorrow was our last day in Marrakesh 🙁