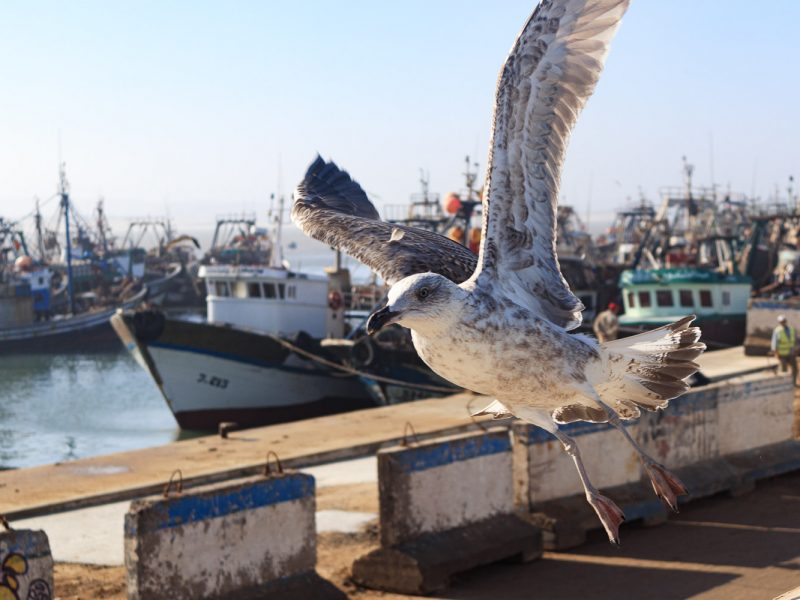 Essaouira. Toto, we are not in Kansas anymore. That last 2 weeks or so in the Moroccan countryside had kind of made the hub bub of a city fade away a bit. Essaouira, was very much a tourist, beach, fishing town. I sort of want to compare it to a cross between the Gold Coast and say Newcastle. A bit of an interesting cross of those two areas but I think it is pretty fair.

I’m going to say it straight away today, I could have spent an extra day or two here easily. There were so many more streets to walk up, so many more gardens and buildings to look at, so much more seafood to eat. Yes, I know this return to trip, keeps having more and more bits in it doesn’t it? Maybe, it will be a few return trips, I’m still young(ish) after all.

Today (well this morning), we were off for a city tour of Essaouira. We started with a short drive from one end of Avenue Mohammed V to the other end. It was over before you realised what was happening 😀 We had a very good city guide today by the name of Hassan. We walked through the port first which was quite interesting, though due to the winds, there had not been that many fishing boats head out this morning.

From the port, we walked along the city wall that braced the city against the Atlantic Ocean and all that it may throw at the city and a had a good luck at the cannons. Then it was through various parts of the medina to hear stories and history. We visited a woodworking emporium that did a lot of inlay and overlay work which was exquisite.

We also visited a silver jewellery workshop/shop as well, and just like the woodworking emporium, I was highly appreciative of the work on display but nothing really grabbed out at me with two hands telling me, asking me to take this piece home. I was on the look out for a jewellery souvenir and whilst I had picked up a pair of earrings back in the desert, nothing yet had tickled my fancy.

That was the end of our city tour and it was now free time for all, free to roam as you pleased and free to make our own lunch choices.

A group of us decided to have a seafood lunch back at a fish stall that we had walked past earlier because well, the seafood looked pretty good and this was a chance for us to try a variety of local seafood. Did we pay too much for this meal? Maybe, but the food was good and no one got sick so really, we didn’t pay too much did we? We may have gotten used to “bargaining” for material goods but bargaining for food and a meal at that was a whole new ball game for us.

After lunch, a small group of us headed back into the medina for a bit more of a leisurely explore. Mum & I were keen to visit a few of the fabric and haberdashery shops we had walked past on our tour in the morning. Unfortunately, it was Friday Prayer time so they were shut up show. Now had been in country long enough now to know that some shops will reopen after Friday Prayers and some will not. Based on the fact that the shops had not been shut up completely, we were hopeful for a reopening. We did a loop round, looking at other shops that had stayed open or had already reopened, you know the ones, that catered to the more general tourist market and not the shops that we wanted to visit that well probably catered more to the local market than the tourist market! After the first loop, a few more shops had opened up as people returned from Friday Prayers, not any of our fabric shops though. So, another loop, a bit slower this time and on return, still closed. We decided to cut losses and continue on our journey. However, we did find one haberdashery shop open as we went past and Mum got some trimmings. So that was a win and we also had a little peak in an upholstery workshop.

The medina of Essaouira, was so lovely, quite a few wide streets, all nice and flat and enough of a grid system that it was easy to navigate. It really did feel quite lovely walking through it. I also managed to pick up a little dress as a birthday present for the little girl who lives next door as it was her birthday when we got home. We also stopped at the post office and got some stamps to finally put on post cards to be sent to various places round the world. It was then a lovely walk home, looking at buildings, trees and everything else.

What I was most taken with though was the landscaping along the top part of Avenue Mohammed V, it was the most lovely mass planting of textural and tonal plant love. It moved so well in the breeze.

I took a chance on the fact that we might get a nice sunset down on the beach looking across to Mogador Island and went down to the beach to watch the sunset. It was a simply pretty sunset, it was not flashy but the sun took a while to set over the ocean (seemingly much slower than the night before). It was also a lovely half hour of some peace and quiet, before tomorrow would bring us to the hustle and hustle of Marrakesh.

One Reply to “Helen goes to Morocco Day 28 – Essaouira”