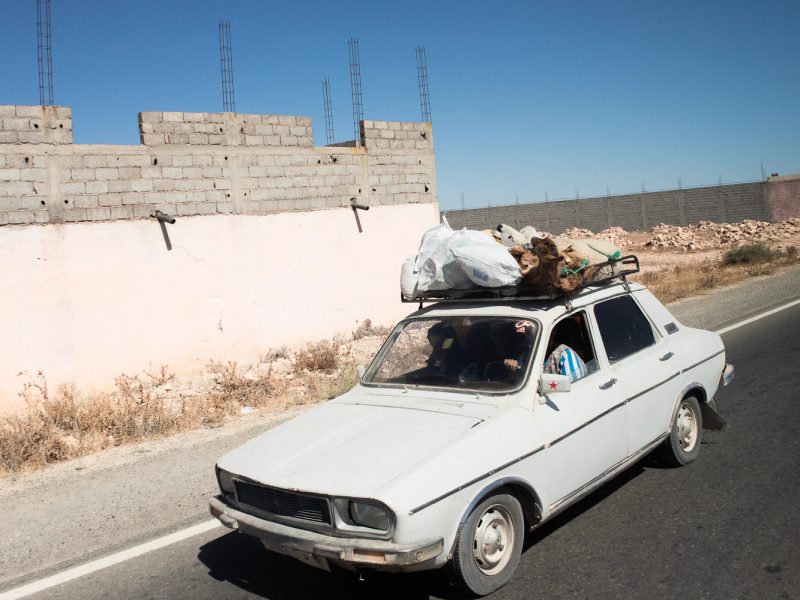 Today we were leaving our village by the spring to head to a village by the sea! But to get to the sea, we had to drive. We drove about 200km today over the course of about 4 hours. A much faster drive today though as were heading back down to the plains and we even spent a fair bit of time driving on multi lane roads today! Even roads with traffic separation for each direction in travel!

As I mentioned yesterday, a group of ladies slept on the terrace last night, oh it was such a lovely night to sleep under the stars.

After breakfast and our bags were packed; Mum, Aunty Margaret, Fiona, Mary-Anne & I headed back down to the spring to enjoy it in the morning light. It really was a lovely little place; the constant babbling of the water coming out of the spring into the creek, the vegetation swaying in the breeze, the light dappled through the leaves. I think I could have easily spent a little while there with a book and a blanket. It also would have been a good chance to observe all the goings to and fro from the spring as people came down to fill up water containers. Looking at the photos of the spring area from last night and this morning, a certain song keeps coming to mind; Down to The River to Pray.

We had a late departure today, 10am! Quite radical, but we were nearing the end of our trip and we only had one walk left to go and then it was just some casual city tourism. Today we farewelled our lovely cooks, Moustache & Ali. I was going to miss them not just because their mint tea was the nicest, I had drunk whilst in Morocco by far. This was just as well since we had just short of 2 weeks with them cooking our meals!

After lunch, the fun continued as we drove and drove and it got hotter and hotter. I was now starting to regret not packing more water for the drive! However, this drive would give me one of my most favourite photo snaps from the bus for the entire trip. This photo is just everything, the at least two goats and one sheep tied onto the roof rack (all live), the sacks of goods on the roof racks as well, the Moroccan star on the side mirror, the three people jammed across the front seats, the aging white car, the exposed reo on just about every building, waiting for the next level to be built. It is just everything and then some.

We were now in Argan Tree country and eyes were constantly peeled looking for goats in argan trees. The only ones we saw where ones set up for a touristy photo op. As far as I could understand, it was the wrong time of year for peak goat activity. This was actually good in a way as lot of the argan trees did not look that healthy.

As we were now in argan tree country, we stopped at an argan oil processing “plant”. I was by this stage “le tired” or probably more rightly “le dehydrated” and ripe for a headache. We had a wee tour and saw the traditional production methods for the processing of the nut, the extraction of the oil and also the making of the nut butter. There was a decent sized shop attached to the production space and I was tempted by some soap but I did not end up buying any. Mainly because I knew how many bars of various soaps I had in the linen cupboard at home! I’ve also been using argan oil products in my hair now for gosh let’s say 11 years now and I’m actually quite happy using products that have extra stuff (artificial chemicals!!) in them and are not just pure argan oil. I find them lighter in my hair and do not weigh it down as much as if I used raw argan oil. Whilst they did have a range of hair products for sale that were interesting, my hair was absolutely filthy and it was difficult to compare some of the products on offer to what I had in supply at home. As such, I didn’t buy anything here. Still, it was in interesting adventure if only for this this Salties & Tiles photo.

It was then back in the bus, to drive about 20 mins to the Dar we would be staying at that night in Sidi Kaouki on the Atlantic coast – Dar Aalida. It was such a treasure of a spot, the wind rolling in off the Atlantic not so much. Still there was this lovely pool and I had a very long swim in that pool. I then had a fantastic hot shower and gave my hair a really good wash. However, the water was a bit brackish, so my hair whilst clean was a bit more like it had a swim in the ocean 😀 :D. It just made the hotel tomorrow night in Essaouira even more alluring.

It was lovely to watch the sunset over the Atlantic, it was all over in the space of a few minutes though 🙂 and that brings us to the end of Day 26! A much easier day to write about compared to Day 25 😀