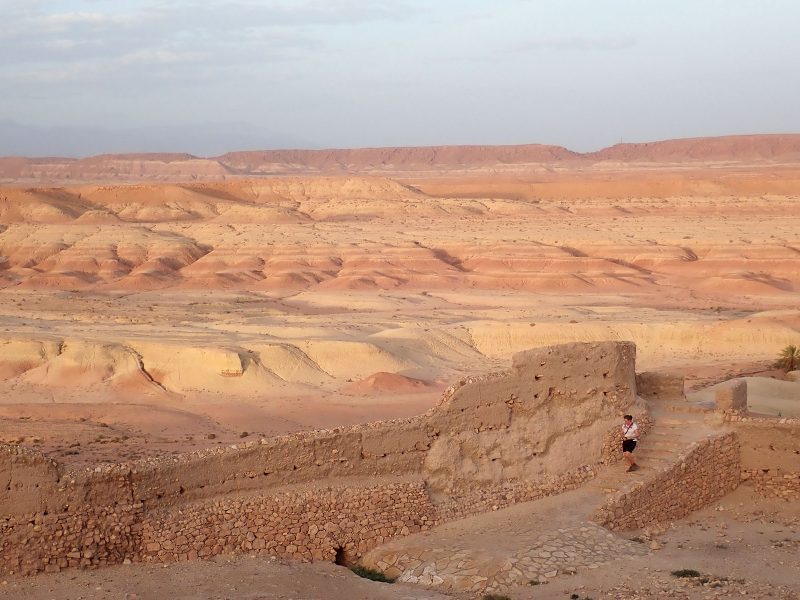 As I said yesterday that I ended up sleeping outside on the roof terrace at Gite le Mont M’Goun and here is the photo proof from Mum 🙂 Also in this set of photos is the very lovely pottery hand basin that was in our room, it was such a simple design and the wall fixing was equally as simple and striking. I would happily have taken it home with me and if/when I ever need to put in a wee hand basin somewhere, I will be doing my best to get one just like this. Also,

Up the hill from the gite was a very interesting modernist design water tower. We would see more these on our drive today and if I recall correctly from the signs I saw, they were a development project by the Japanese in the 70s. I’ve been down a bit of a rabbit hole trying to find out more details about them to no avail.

I love a good fountain and Morocco had a good show of them on roundabouts and the like. Today though, we were going to see the one that hands down took gold medal for best fountain. It was in the the town of Kalaat M’Gouna, which is one of the main rose processing towns in the valley, which also has as roses festival each May. It was a rose fountain in the middle of a roundabout!!! Sadly, I didn’t get a photo of my own and whilst I said we had a few stops along the way today, a stop at this fountain for Helen to take photos was not one of them 😀 After a bit of Google searching, I have found a photo of it for you to look at here, sadly, I can’t find a photo of it with water in it but I believe that the water may get turned on for the rose festival. Guess, I will just need to go to the festival then if I want to see the fountain running.

We passed lots of “co-ops” and shops selling rose products and we eventually stopped at the one that we would be visiting. I found this quite interesting and would be interested to find out if there are some shops that don’t have any organised tour groups visit them and also how well the tour groups are distributed across the various shops. I know that the shops/co-ops we visited were ones that our guide, Brahim had been to countless times before as that is how these things work.

I was looking forward to the rose product shop, however I was quite disappointed. As someone who has been using Rose Jam shower gel from Lush for let’s say at least 7 years and someone who has some very fragrant roses of my own in my garden, I know the rose scent that makes my pulse both calm down and also rush. The rose scent of the products in the shop that we visited were not the rose scent that I adore. When I return to Morocco, I have an idea of visiting quite a few of the rose product shops in this valley and seeing if I can find one that has products with a scent similar to what I love. We did however get some very nice ice creams from the snack store that was set up next to the rose product shop. You win some, you lose some.

The drive to Ouarzazate was quite interesting as there is massive solar power station off the road which we all agreed would have been most interesting to have done a tour of it had been possible! It was also interesting as we were most certainly coming through a change in landscape and geology, we were heading into more open plains then the narrower river gullies we had been in. Ouarzazate was/is one of the movie making hubs in Morocco and we drove past quite a few studio lots.

Our first stop was at Kasbah Taourirt in Ouarzazate. This was an interesting tour through a Kasabah where it seems the front portion has been somewhat restored with UNESCO funds but large parts of it behind the areas used by the Glaoui family that controlled the area have fallen into various states of disrepair.

After our 1hr tour, we headed a little way down the road to a restaurant for lunch. This was a long lunch as we waited close to 1hr for our food to be served and the restaurant was not at all busy. Yes, the food was good when it eventually came out but this was the first time that we had waited this long for meals which did not help with any of the hangries. Just down the street a few doors from our restaurant was a supermarket with attached bottle shop. I took the chance to get a toothpaste refill and others took the chance of having access to a bottle shop for the first time in quite a while. More importantly though, beside the supermarket was a patisserie and oh what a fine patisserie it was. We picked up a few treats to eat. I thought I had taken a photo of the display case or some of what we had purchased but strangely no.

The drive from Ouarzazate to Aït Benhaddou was a very lovely short 30 mins, which was good as it was getting a bit hot and stuffy on the bus. Our trip notes for today and Fiona’s recollection from the year before talked about the pool in our riad, well the race was on once we got our rooms to see who was going to be in the pool first. As, the last one is of course a rotten egg! The pool was freezing but if you just jumped in, you got used to it and it was most certainly a refreshing change from the heat. I think I just made it as the first one in the pool, though I’m sure Mum will correct me if I was wrong.

We had a lovely swim and relaxing time by the pool as well as doing some washing before our walk over to the old part of Aït Benhaddou (ie the World Heritage Listed part) to head up to the agadir for sunset. This was a lovely stroll up the hill through the old town to the top. Oh what a fantastic place it was. I would like to return and spend perhaps the whole day up at the top of the hill watching the colours change and the light move across the landscape that surrounds Aït Benhaddou. I had fallen in love with the reddy, orange coloured hills a few days earlier and a year later, I still love those reddy, orange painted hills.

The sunset was a bit a bit of a fizzer however, we did get to enjoy watching a tourist couple having wedding photos taken! We were most certainly not expecting to see that today!

Whilst waiting for the sunset, most of our group stayed up the top to chat and observe the going-ons. I however was off to walk the wall and to see what I could see. This photo that Mum took of me whilst I was doing this is just 200% me. I truly was in my element here, those reddy, yellow, orange hills that I just adore, that late afternoon light, me and my cameras, it was just magical.

The below panorama looking generally north, north east from the agadir is another one of my absolute favourite photos from the trip. Those hills, gosh, I would dearly have loved to spent some time walking over them, maybe next time.

As I said above, the sunset was a fizzer but this photo taken as we were walking back over the bridge to the new town makes up for it. Pinky purple sky and date palms, just perfect.

And that brings us to the end of Day 17, what an adventure packed two and bit weeks we had thus far. Let us know see what the next two weeks will bring.