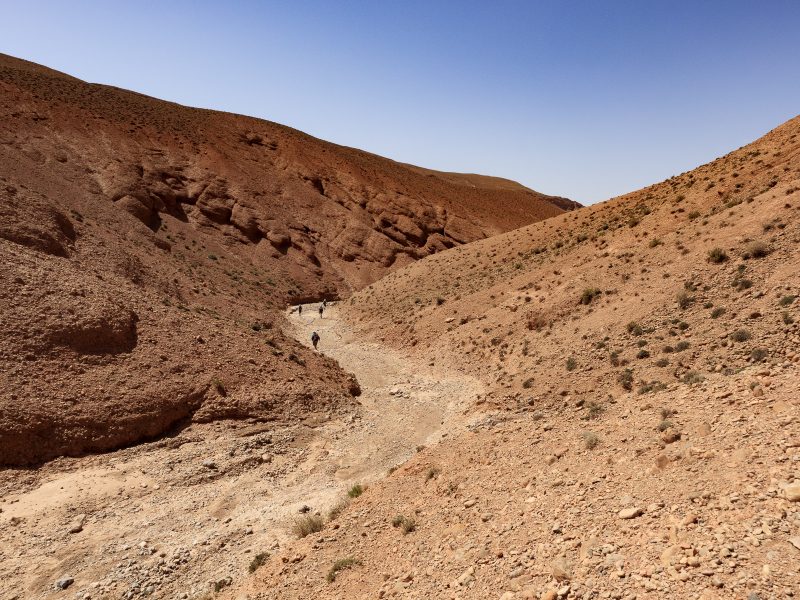 Today was our first of three days walking in the southern area of the High Atlas Mountains. Three days to increase our exercise levels at a higher altitude than most of us who were from SE QLD are used to walking at. The next three days, it was all transport by your own two legs, there was no nice air-conditioned bus waiting to pick you up. This was what so many of our group had been waiting for, a chance to give the legs a good stretch, a chance to dwell on the landscape.

The summary from my journal is as follows, “we did about 17km today from our auberge, up a creek bed, over a mountain pass and then down a gorge to a creek and then through a small town and up another creek to our auberge for the night”. That’s a pretty concise wrap up of the day.

The geology today was breathtaking, the weather today was baking through till lunch time due to the reflected heat from the rocks. Later in the day though, a small patch of rain and cloud cover came through which cooled the landscape down quite a bit. This was such a nice relief as there was not that much of a breeze whilst we were walking. This lack of a breeze made it quite pleasant though for those of us who were walking with umbrellas for shade as you were not wrestling with the umbrella in the breeze 😀

As I have looked through my photos to collate the ones for this post, I am struck time and time again by the landscape. It truly was constantly breathtaking and awe inspiring. I know I have just said this in the above paragraph but it really was something special today. It was a bummer that Aunty Margaret was still not in the best health so was not walking with us today, she would have loved the geology and the vastness of the landscape.

When we reached the pass on the Tamassint Plateau, it made the baking heat on the walk up worthwhile as it was just incredible. I recall not knowing which direction to look in.

As much as I had loved the walk up to this pass, I was not prepared for the walk down from the pass to the oleander grove that would be our lunch spot. WOW, just WOW. The rocks, the slopes, the plants, the shapes, the everything. There was masses of conglomerate rock, that I reckon in parts were at least 2m high. It was just amazing.

The dominant plant up until lunch time was most certainly the oleander. A plant that we were most certainly used to seeing by now as it grows just about everywhere. The oleander is considered to either be a native or naturalised in this part of the world so it was quite a bit special seeing a shrub/tree that is grown as an ornamental at home in Australia growing wild in Morocco.

We had lunch in a very lovely oleander grove. Let us call it a grotto though, as if were all single digit in years or perhaps early into our two digit years, it would have been the most amazing place to play and to create little cubbies amongst the oleanders. Lunch comprised of mint tea, assorted salads and the most delicious canary melon. Lunch also comprised of a nice siesta on the picnic carpets and mats that had been laid out. There were quite a few photos taken of the group enjoying the siesta but I am not going to share those.

After lunch we continued down the river we had been walking along to where it joined the M’Goun river and a somewhat sizeable village at the river junction. We then turned right and headed north up the M’Goun river. We had a river crossing here or two that required a change into our river shoes and it was quite refreshing to feel the cool water rushing over your feet. The hills were just breathtaking, the colour, the texture, the light, the everything.

When we reached the auberge, we were greeted by Aunty Margaret in a very sorry state, she had slipped after taking a photo on the side of the road on the way to the auberge and had likely cracked a rib. She was not having a good start to this mighty Moroccan adventure we had planned (edit, I got my days mixed up, this happened the following day). The view over the M’Goun river was as you can expect me to say, amazing.

After a bit of a happy hour on the balcony of the auberge; Fiona, Mum & I went for a walk up the hill behind the auberge. We had a marvellous time looking for interesting rocks, enjoying the space and taking in the beauty of where we were. We also cooed over some kid goats in a pen on the way back down which were pretty darn cute.

A feature of my journal today and a bit of a recurring theme, was how thankful I was for parts in my life that had led me to the person I was one year ago in Morocco and also today a year later. An extract from my journal today reads as follows:

I do not judge, I do my best to not assume. I try to lead with compassion and charity. I’m thankful for the roof over my head, the clothing on my back, the food I eat and a bed of my own to sleep on.

I was thankful for having done an arts degree that majored in Asian History & Politics along with International Relations. I may not have done much on the geo-politics or the socio-economics of Africa or even just North Africa but I know enough about Islamic cultural traditions, impacts of colonialism and economics that I was not going to stand round comparing every single thing I saw or every single behaviour I observed or every way of life to the way I lived in Australia.

I was also thankful for the life view I have adopted over the years, one where I try hard not to judge, not to assume but to try to understand. I am incredibly grateful for the opportunities I have due to being born where I was born. I dearly hope that this life view does not regress as I age but further provides for me to continue to be open to the world, to learn about ways of life that are different to what I know and to live a life with openness.

You may not have been expecting this bit of commentary, after all you are mainly just here for the photos aren’t you? But the purpose of this blog is to capture what was happening on our trip, one year ago today. And these thoughts were playing quite heavily on my mind at this point in the trip. One year on, even more so with the lens of COVID-19 to look back on what we experienced and also how lucky we have been with COVID-19 here in Australia and particularly in QLD.