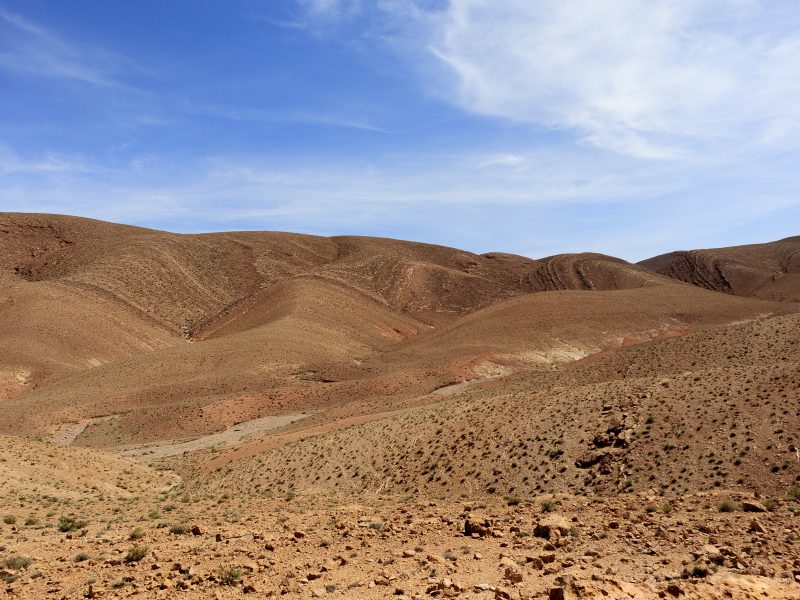 The plan today was that Aunty Margaret would walk with us after lunch so yet again, we packed up and rolled out, leaving her with the yellow bus. It was back down to the M’Goun river and we walked up through the two villages on the eastern side of the river. If I understood what we were told correctly, these two villages, even though they appeared to be one were two very distinct villages. Just as I would always keep my eye dancing over the ground looking for tile scraps, Mum was on the lookout for fabric scraps. Today we found quite a few little fabric scraps to add to the stash. Winning! We also had the benefit of getting to look at these amazing rock formations in the hills on the western side. The folding, curving lines of rock were stunning.

Another highlight was seeing a young boy playing with a hoop and instead of using a stick to push it along, he was using a hook. The hook was piece of poly pipe as the handle and then a j shaped wire hook. He would then guide the hoop in the j hook. Nice little piece of toy craftmanship.

After walking up through the two villages, we crossed the M’Goun river again to now walk back down the river part of the way on the western side of the river before we went up the hills. We could have reached the same destination by walking up the hills to the west behind the auberge where we were staying but this walk was much less of a uphill slog to start the day off with and had the added bonus of the cultural element of walking through the village and the scrap fabric collecting for Mum :D. The other added bonus was that we walked past a school and somehow, we ended up saying hello to a year 3 class and singing Waltzing Matilda for them and also Heads, Shoulders, Knees & Toes.

Just like yesterday we walk heading for a pass, unlike yesterday the weather change at the pass was not going to be pleasant. When we reached the pass, it was quite windy. A sign of the fun to come later that afternoon. There quite a few quartz intrusions at the pass and then further down the road which were very cool to see. The view from this pass was quite speccy with all the colours in the landscape. I could have spent more time up here observing the colours but the wind was a bit harsh.

The walk down from the pass was quite interesting as passed sections of quartz which was pretty cool. We were having lunch in an almond grove today and as I was walking up, I spied a tiny piece of mauve patterned glass about the size of a 50cent piece. It was to be the first of more glass treasures to be found on the rest of the trip. It was such a treasure to find. We were greeted at lunch by a flock of sheep coming down to the water trough for a good drink and also Aunty Margaret in a sorry state, she had slipped after taking a photo on the side of the road on the way on the way to the lunch spot and had likely cracked a rib. She was not having a good start to this mighty Moroccan adventure we had planned. Still she was going to walk with us this afternoon and see how she went.

Take add two to three sugar cubes depending on taste to say half a measure of still warm mint tea (a measure is a Moroccan mint tea glass), stir vigorously to dissolve and form a loose syrup.

Drizzle over cold rice, add some cinnamon if you are able to find any.

One of the food highlights today was making mint tea rice pudding with Fiona as an extra dessert with lunch. Should have taken a photo but like many things, photos don’t always get taken. The memories live on in our words and our memories instead.

After lunch and the corresponding siesta, it was time to hit the path again. We had a long line of rolling hills in front of us that looked just stunning. They certainly photographed quite well as well, even at 2:30 in the middle of the afternoon sun. However, there quite a bit of head wind through this section, the words in my journal are as follows, “We walked up and up so we would walk across a path as it undulated over the hill. The wind was brutal.” This wind along with the reflected heat resulted in the group spreading out quite a bit

However, the stretch coming across the plain towards Alemdoun was the scene for one of my favourite photos from the trip of part of our mule team having a break.

Another one of my highlights today was coming across native Statice in the boggy area that we crossed on the hill before we reached our gite. We grew Statice quite a few times as kids (or newspaper flowers as we called them for their rustling sound) so it was quite special seeing their wild relatives.

The compound which our gite was part of was built into the side of the hill and this gave us a lovely vista from the patio. We were sitting on the patio which would also be our dining terrace and I started to notice the colour in the sky starting to get a bit pretty. I ambled out of the compound and then of course kept going up the hill behind the compound to chase the sun. David one of the other walkers had also noticed the colours in the sky and had also hot footed it up the hill. We came back down the hill in the dark to dinner ready to be served. The bread that we had with dinner tonight was one of the most amazing that we had on the trip. I cannot tell you what made it the most amazing as unfortunately I did not write any further notes down other than the fact that it was most amazing.

After dinner, our crew of cooks and mule men along with the family that lived in the compound started to sing and dance, a few of our group joined in and others just enjoyed it from the sidelines.

Day 2 of our 3 day was complete, who knows what we would discover on day 3!