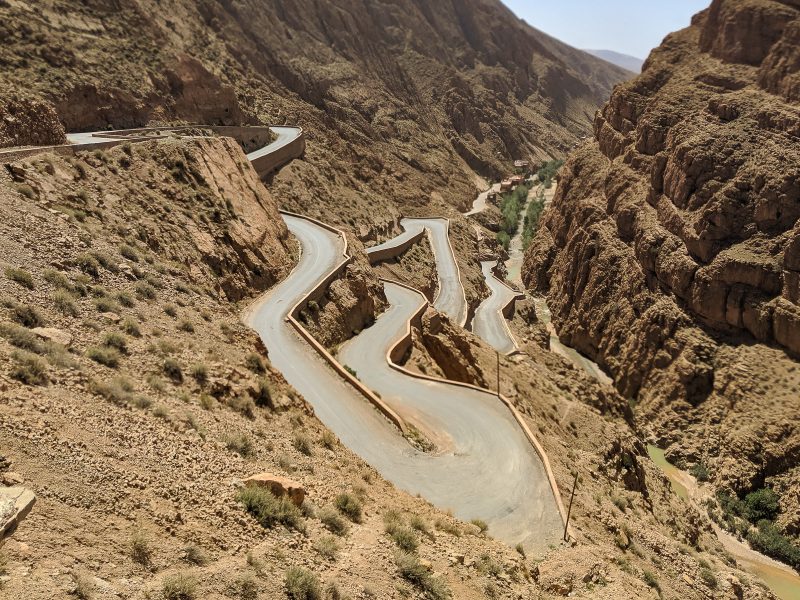 Today is a short day, short in words, a bit shorter in photos and also shorter in the sense that I somehow managed to completely skip this day in my travel journal. How, I managed to do this, I’m not sure but I did.

Today we had a short walk (approx 7.5km over 3hrs) from our Auberge at Ait Youl up along the Dades River and part way in to the gorge. We would drive further up the gorge after our walk. It was quite a lovely walk that in some ways built on our walk yesterday as we were again walking though small crops grown in the fertile and easy to irrigate land beside the river. The river today though was the Dades River. I guess due to the smaller populations, these small lot farms were supporting, they were not as dense as they were yesterday on the Todra River. Unlike yesterday, there were very few date palms today but a lot more figs and some walnut trees as well. We started to see more and more harvested figs out drying in various places. Brahim stopped us at least twice along the way to quiz us on the Tamazight numbers that he had taught us yesterday on that long drive and also the names that we had been given.

We meandered up the river until eventually we came up on to the road for a while before darting back down to walk along the river; it is really interesting to notice the microclimate change between the road and along the river.

We eventually got to a very lovely birch grove where we rested for a short while before heading up to the road where we waited for a while for Ibby and the bus to appear to us to jump in and drive further up the Dades Gorge.

Aunty Margaret was not feeling the best and skipped the walk and had missed jumping in the bus with Ibby when he left the auberge so she unfortunately did not get to do the drive up the Dades Gorge. This of course is on her list for the return trip to Morocco whereas what I have on my return trip is that I want to drive myself up and then down the Dades Gorge on our next trip to Morocco. It was such a marvellous section of road with all those hairpin bends climbing up the side of the gorge. The geology of the gorge was just stunning and there quite a few canyons that we drove past that I would have dearly have loved a chance to walk/rock hop up them exploring.

We stopped at the Monkey Fingers on the way home as well, which is the most interesting geological formation of eroded stone that is said to resemble the fingers of a monkey.

We got back to our auberge at Ait Youl to a lovely meal prepared by our in-house cooks (another Ibrahim who went by the name Moustache/Moustaf & Ali) who would be with us for about the next two weeks. The below gallery shows the salad from lunch and the rest of the photos are from dinner, all just yummo.

After lunch, Mum & I took Aunty Margert out on a little walk round town and also to look at some plants that we had spotted on the start of the walk. I of course was also hunting for more tile rubble pieces and decorative metal work.