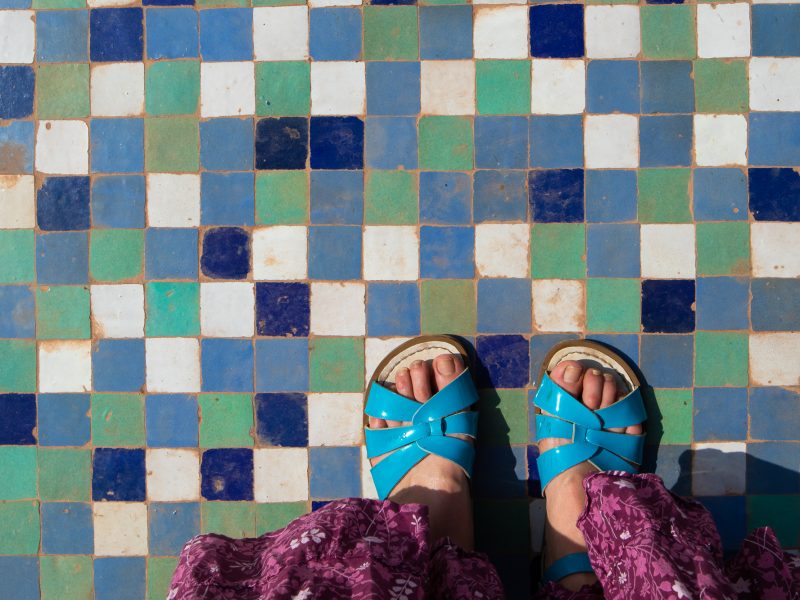 Our first full day in Morocco.

We woke up to a glorious day, blue skies and warm weather, not too dissimilar to what we had left behind in Brisbane.

Today a group of us headed “into town” to explore a bit. We got on the tramway at Ain Diab and headed towards Mohammed V Square where we went on a bit of walking tour out of the Lonely Planet Guidebook.

The tramway was quite new and flash with the Ain Diab section of track only opening earlier that year. We had quite a fun time buying tickets as the machine was a bit temperamental when it came to which coins it would accept and not accept…

I really wish that there was Google Street View in Morocco. Amongst many things I wish I could go back and look at on Street View, was this most amazing post modern house opposite the tram station at Ain Diab which had a very lovely cactus garden on the top balcony. The photo I took of it from the tram station platform was not a very good one and did not capture enough detail for it to be worth sharing here.

The tram ride was quite interesting as it swung round parts of Casablanca, we rode past some very new apartment developments with some very lovely architecture and landscape design. We also rode through some not so new parts which were just as interesting looking at the layers of development over the years.

Our walking tour took us through the Arab League Park and then to look at Cathédrale Sacré Coeur, a rather sad looking technically former Catholic Church and then through to Mohammed V square to explore the buildings in that precinct. The below map shows the general route that we followed.

It was then time for a coffee break before a group of us then headed off to continue parts of an Art Deco walking tour of Casablanca again loosely following the Lonely Planet instructions before we planned on arriving at the old Medina for an explore.

Oh, be still my art deco beating heart. We had a wonderful time wandering the streets to the north and north east of the square. There were enough decorative features to make my heart beat fast and my eyes constantly darting round comparing carvings, mouldings, railings, grille work and paint. It was an absolute treasure and I took what seems like 1 million photos of all these features.

In saying that though, a lot of the buildings are showing their age, and like many older buildings in any town or city worldwide, the upkeep is a difficult item to balance. I still remember one of my first trips to Melbourne and walking down the street and looking at the peeling, pollution grime covered facades of the shops on the high street and wishing that the local councils would come along and take a pressure cleaner to these buildings to freshen up the streetscape.

After stopping along the way to buy some prickly pear and nougat, we eventually ended up at the Medina. At the Medina, very quickly we were approached by a “guide” who took us on a rip roaring walk through the Medina with a stop off at a herbalist shop before depositing us at a carpet shop… I’m not going to rehash the stories that you can find all over the internets if you search for Morocco Medina Carpet guide or even just buying a carpet in Morocco. Were any of us at all prepared to buy carpets that afternoon? Or even planning on buying carpets that day? No. However, as Mum pointed out though, we had plenty of time that afternoon, so we were able to take our time and browse the carpet offerings. We may not have that time later on during our trip.

Am I happy with the rug I purchased? Yes. I look at it every day in my bedroom and it sparks joy. Did I see any other rugs along the way that I liked more and wished I had bought them instead? Not really, I saw a few that were a similar design with a more blue colour way which I adored but not enough for me to regret this rug. Did I pay a little bit too much? Probably but it was not much more than I had quickly googled to figure out what my budget for a carpet was when I saw this one.

The day had now passed quite quickly and it was time for us to get back on the tram back to our hotel for our formal start to the tour, where we would meet our head guide for the trip (Brahim) and also meet the rest of our fellow travellers before we started our real adventure through Morocco.

When I next return to Casablanca, I am looking forward to spending some time just walking round the city looking at buildings, there were so many more buildings I would had have liked to have seen. In particular, there is quite a cache of modernist buildings and infrastructure in Casablanca that I’ve discovered thanks to the MAMMA Group that is dedicated to preserving the memories of the modernist and brutalist gems that exist in Casablanca.