At the moment I am listening to Confusion, a collection of unreleased live songs by Elliott Smith. It is a really great collection of his songs which have never been released and the sound quality is amazing. Pure Elliott. I hope to get the new album New Moon when I go to work on Saturday, I have listened to a few songs off it on various MP3 blogs and the album’s myspace and I am very much waiting to listen to the 2 CDs through.

I watched two really great TV shows in the past week (both on the ABC of course) , the first was Wildlife in a Warzone which looked at how wildlife numbers are coping in Sierra Leone as well a curious first trip home in fifteen years for the “host” Sanjayan Muttulingam. All in all very interesting, especially finding out that since the end of the civil war in 2002 personal ownership of guns has been banned in SL, which has had a secondary effect of reducing the number of protected animals that were been hunted. The other was of course Bastard Boys, a dramatised telling of the 1998 waterfront dispute, I felt that it was really well put together and can see it picking up a few awards this year. Of course it caused a lot of debate round the net, in the papers, on the radio etc as to if it was Howard Bashing and free advertising for Labor or using it as an example of the bias in the ABC it went on and on.

I went for a walk to Aldi today and took this photo on the way there. It is the Chermside Bowls Club that is just round the corner from our house and in a couple of week we are having a barefoot bowls day there for work, which will be heaps of fun 🙂 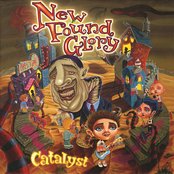 All Downhill from Here
New Found Glory
Catalyst
22 minutes ago