It is Thursday night, about 71 hours since The Breeders walked onto the stage at The Zoo. I am laying on the floor of my bedroom with my laptop (oh yes, I got a laptop a month or so ago, it is pink, I love it) in my Breeders shirt, listening to Mountain Battles and loving it more and more. In those 71 hours all I have listened to is Breeders, The Amps and an itsy witsby bit of Kelley Deal 6000 and I could not love the sisters Deal more.

Charlyn likes to remind me round the net that I was super excited and well I must admit she is telling the truth. Man the grin I had on my face was a grin that has never appeared on my face at a concert before and probably never will, well the only time I think it will reappear will be if I ever get to see The Breeders live again and let me be honest and truthful I am by no means counting my eggs for that on the flip-side, I had a thought at the gig on Monday night that I could so see those girls pushing 70 and still singing their songs on the stage. I will have to wait and see I guess but those few hours will be a night I will cherish for the rest of my life.

I still find it so hard to believe that man oh man I saw the Breeders. I will be sitting at my desk at work or walking to the train station and I find myself smiling at the thought of how magical Monday night was.

Gaslight Radio were the supports and to be honest I didn’t really think much of them. They had one or two alright songs in their set but that was about it. The lead singer had quite good stage presence but it was really let down by some of the other band members. One of the guys spent the entire set with his back to the audience playing his guitar??? what the?????

My favourite photo I took during their set was not of them but of a piece of A4 paper I saw on top of an amp.

mmmm yeah! The set list. I close to fainted when I saw that Safari was on there. Still that didn’t stop me from yelling out for them to play it during the set and then Kim said something back to me and they they played it and well Helen went into a state of euphoria. The deviated from the set list a bit I think with the addition of one or two impromptu songs that I can’t recall. Looking at the order of the songs in the photo above and the set list from the show in Boston it seems that the set list for the shows on this world tour are pretty much the same.

I would have really really really liked to have heard and Flipside and Hag and When I Was a Painter and Son of Three and well the 100 other or so songs in their discography. Though I am really kicking myself for not yelling out for the Buffy theme as that would have been so fricking cool.

I don’t know where to start about the Breeders set. It was just magical. The sold out crowd was a real mix of ages; people my age, people a bit younger and plenty of people who are more Karl’s age. As there were so many people like me who had been waiting years and years to see them, the atmosphere in the crowd as they started to play the songs and banter was just incredible, Kim and Kelley interacted with the crowd a lot and seemed incredibly at ease on stage.

You can see the rest of the photos over at helenpalsson.com.au or at The Dwarf

If The Breeders come to a town near you any time soon, go! (and ask me to come along too :D) 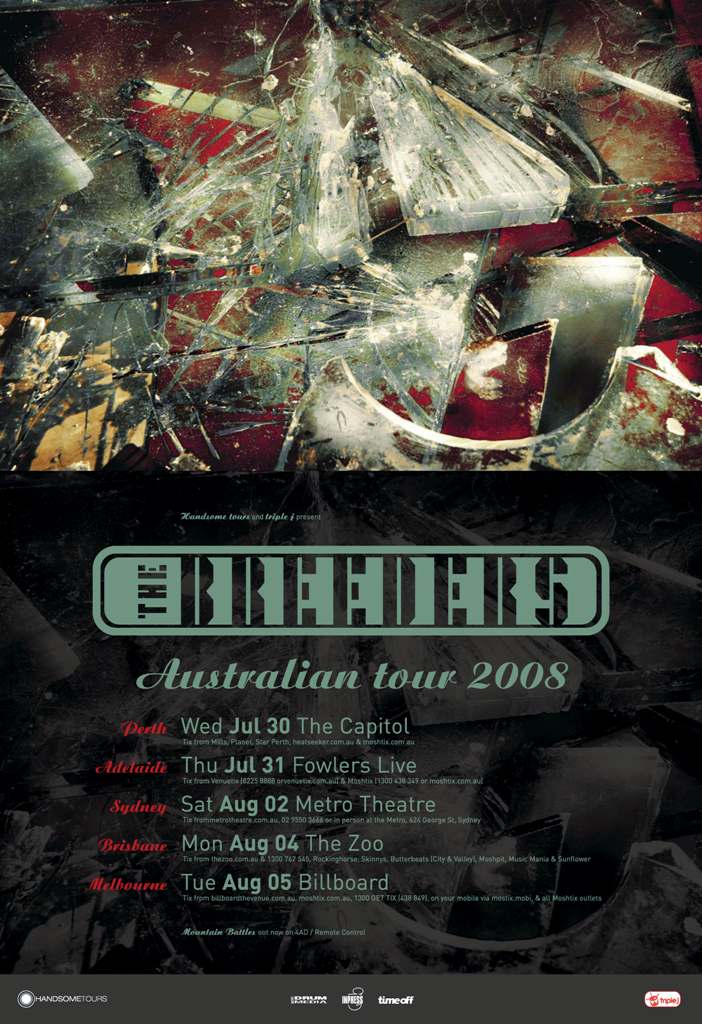 Is Helen happy? This is just the icing on the cake! I had a great weekend a post is coming on that.

Monday.
I set my alarm for 6:15 this morning. When it went off I was in the middle of a dream. I turned my alarm off and dozed back to sleep in an attempt to finish my dream. I didn’t finish my dream. Mum woke me up at 6:30. Really wish I had finished my dream. Tuesday.
I set my alarm for 6:00. When it went off the first thing I thought as I reached for my phone to turn off the alarm was my name is Helen Palsson. Still thinking about that one. Wednesday
I set my alarm for 6:00. When it went off my first thought was I wonder how the casserole I had in the oven went over night. The Breeders new album, Mountain Battles leaked (how many albums these days don’t leak? I am not instantly in love with it. Which surprises me. I was meant to love it from the very first note I heard. This is The Breeders in terms of shaping musical tastes, they were the first “modern/current” band that I fell in love with. I am going to listen to it for the next couple of days and see how it grows on me. I am on the second run through now and bits are starting to grow on me but it is very much not how I thought it would be.

Straight from the mouth of Kim Deal and typed by Kelley Deal.
I knew it was coming next year from the little bits I have seen round the ‘net but there it is in black and white.

The new Breeders record is scheduled to be released in April 2008. There are 13 songs. Mando Lopez is still on bass, Jose Medeles on drums, Kelley Deal, my evil twin, on guitar and vocals, and I’m playing guitar and vocals.

The songs are just songs. But for instance, one song Kelley and I did live. She played stand-up bass and I played acoustic guitar while we sang. Steve Albini taped it live like that. Yet another song has Kelley playing bass and Mando playing rhythm guitar. I’m playing the lead and Kelley and I are singing throughout. On song has Mando playing a lead guitar which Albini then backward masked. One song has three, count ’em, three basses on it….

To say I am mildly excited would be an understatement. I just can’t wait till they tour the album. If/When they come to Aus, you can bet my bottom dollar that I might just go to more than just the Brisbane Show.

The Breeders are by no means my most listened band but they are the band which has influenced me the most. I can still vividly remember watching the Safari video clip on a Rage tape and been blown away. Who was this band?

That was written yesterday, this morning when I logged onto Myspace this bulletin was waiting for me.

4AD is pleased to announce the forthcoming world-wide release of Mountain Battles, the new album from The Breeders on Tuesday, April 8, 2008 (April 7 outside of North America).

The Breeders released their last album – Title TK – back in 2002. Since then, of course, Kim Deal has been part of one of the most highly successful and warmly received music reunions of all time, getting back together with the rest of The Pixies for a series of exhilarating live shows in 2004 and 2005. After that, Kim headed back to Dayton, Ohio to start writing a new record.

Mountain Battles is the result. It’s an album which captures all the bittersweet electricity of classic Breeders records like Pod and Last Splash, and which breaks new ground at the same time; classic sounding, yet as relevant and exciting as ever.

Mountain Battles was recorded by Steve Albini at Electrical Audio in Chicago, Erika Larson at Stagg Street, Manny Nieto at Manny’s Studio, at Refraze in Dayton and by Ben Mumphrey in the Basement.

The Breeders are : Kelley Deal, Kim Deal, Jose Medeles and Mando Lopez; Jose and Mando are both veterans of the Title TK campaign.

The Breeders will be playing live all over the world in 2008. Their schedule includes performances at Canadian Music Week and SxSW and Coachella, plus full tours in the USA and in Europe.

The Breeders are also set to play a full UK tour in April to mark the release of the album.

The Mountain Battles tracklisting is :

We’re Gonna Rise is currently streaming on The Breeders myspace page. I am at work for another 7hrs 45mins. The first thing I will be doing when getting home is listening to that song 😀