I’ve been wondering for a couple of weeks if you were able to get holly from the florist at this time of year in Australia, I did a bit of googling but nothing conclusive came up. Last Saturday, I rang the local florist (Northside Flower Market) and asked if they were able to obtain holly at this time of the year. The lady on the other end, politely laughed and said they have buckets of it! This of course meant a happy Helen and a couple of hours later I was in the cold room carefully examining the holly bunches for which had branches that were not too woody (i.e suitably bendy) but also had well formed holly leaves. After some time, I found two bunches that fitted my criteria.

We then had this, yes I picked up some spruce bunches as well, mmmm spruce. 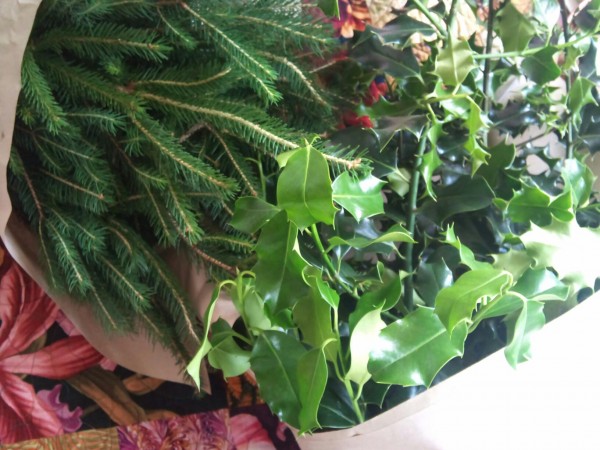 It was then over to Spotlight, which surprisingly was just about empty!!! I know on a Saturday afternoon … I didn’t even have to line up at the checkouts… Crazy. I picked up some steel rings (one which was 400mm in diameter and the other was 350mm) and some floral wire.

The holly then went into a bucket of water downstairs in the cool till last night when I decided it was time to get up close and personal with the holly (read, let’s get prickly). Apart from the prickles it was dead simple to make and probably only took about 30 minutes or so, I was listening to Nightlife and spent some time just listening. The interview with Katy Gallagher (ACT Chief Minister) was most interesting. 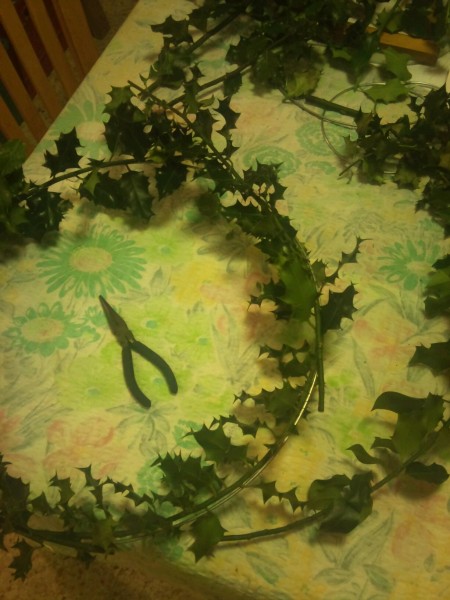 I arranged the branches round the ring and then went round wiring the branches on, using about three pieces of floral wire per holly branch and then used more wire to make a hanger that is is the same style as on the back of picture frame. I then wrapped a length of red bead garland round the 350mm ring and hung it behind the holly wreath so it “sort of resembles” holly berries.

The final product, hanging above the plates over the stair well. Do you see the the mini candle wreath on the Royal Doulton Rustic England quatrefoil bowl? The plates do not escape Christmas 🙂