This post is so long overdue it is not funny and Ange I hope I do you justice. The other week, ok a few other weeks ago I received a package in the mail. The package contained a CD. A CD that made me smile when I opened it. A CD that I had been looking forward to for quite some time and I am pleased to say it most certainly exceeded my expectations.

That CD was Aniseed Tea by Ange Takats, a collection of 9 charming songs.

First I smiled at the CD cover of a woman with parrots climbing over her, then I smiled at the linear notes. Then I put the CD in the stereo and I smiled at hearing the first strains of My Song. It is rare for me to stumble across a CD that takes all the best things from a live performance (obviously what I enjoy most) and makes it a 1000 times better. This CD is like that, the production, the “noise” is just jaw dropping. I have played the CD countless times over and every time I love it more. The instrumentation is understated and serves with the whole purpose to accentuate the fragility and gentleness in Ange’s voice. The voice that won the Lis Johnston Award for Vocal Excellence at the National Folk Festival this year.

One thing I have adored about Ange’s songs is that they are simple songs telling the tale of life. Songs about temptation, longing, individuality and living. Just plain simple songs with meaning, love and a tune.

Of course one reason I love this CD is also the fact that on one of my photos grace the CD booklet. 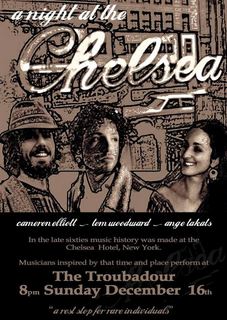